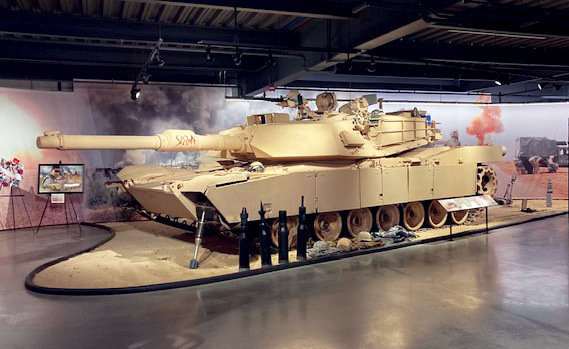 The M1 Abrams is a third-generation American main battle tank designed by Chrysler Defense and named for General Creighton Abrams. Conceived for modern armored ground warfare and now one of the heaviest tanks in service at nearly 68 tons, it introduced several innovative features, including a multifuel turbine engine, sophisticated Chobham composite armor, a computer fire control system, separate ammunition storage in a blow-out compartment, and NBC protection for crew safety. The M1 Abrams entered service in 1980 and currently serves as the main battle tank of the United States Army and formerly the Marine Corps.

Mike Manougian, a volunteer docent at the American Heritage Museum, has recent experience in the US Army and as an Abrams tank company commander. He will discuss the history of the Abrams tank, its capabilities, tactical employment, and lessons learned from recent wars. Mike will also talk about his own experience as Commander of a tank company.