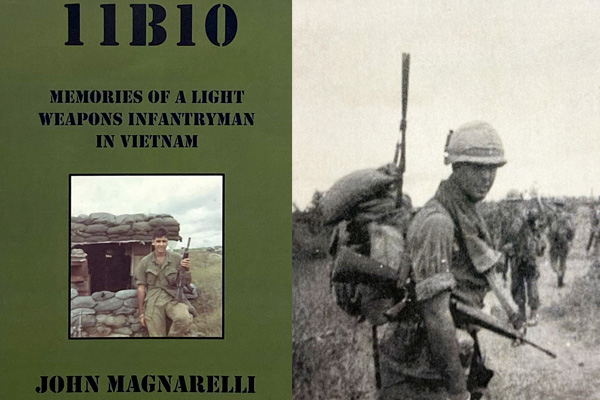 Mr. Magnarelli will talk about his experiences as a young soldier in the Vietnam War and the processes he went through in writing his captivating book.

11B10 is a memoir on what Army life was like from boot camp through combat through the eyes of a young man just out of high school. Without glorification or exaggeration it reflects the experience of the author’s time in the service specifically his year as an infantryman in the 82nd Airborne Division and 11th Armored Cavalry Regiment in Vietnam. It is written in a way that veterans will relate, but also for non-veterans to understand what veterans went through. It is an emotional journey sprinkled with some necessary humor and even has the words from actual letters that were written home.

About the author:
John Magnarelli grew up in North Quincy, MA and was drafted into the Army on August 12, 1968. After his tour of duty in the Army he went on to receive a Bachelor’s and Master’s Degree in Business Administration from Suffolk University in Boston. He had a 36 year career with the US Department of Agriculture, and for his last 27 years was the Regional Director overseeing the National School Lunch Program and nine other feeding programs for the six New England States and the state of New York. In addition to his professional career he was a high school football referee for 46 years, elected to two terms to the Duxbury, MA school committee and for the last 10 years has been the Adjutant General for the Duxbury American Legion Post 223. John and his wife Pam now reside in Plymouth. MA.