This PBY was the United States’ highest scoring U-boat destroyer in history, and is the oldest operational Catalina.

The Battle of the Atlantic was the only part of the Second World War that truly worried Winston Churchill. That the Island Nation was under siege was not new, but the effectiveness of the Kriegsmarine’s U-Boat campaign was very clear. The British Isles were being starved by the actions of the U-Boats. The Allies first triumph in the Battle for the Atlantic was modifying the prewar PBY Catalina patrol plane into the ASW, for Anti-Submarine Warfare. The PBY Catalina was capable of excellent endurance (15-20 hours) over the hostile North Atlantic. It began to protect convoys before the advent of aircraft carriers and the evolution of surface ship technology were able to assist them. PBY type aircraft destroyed 38 German U-Boats during the war. Our PBY, Bu. No. 2459, accounted for three destroyed U-Boats and one damaged that never sailed again. It is the USN’s highest scoring U-Boat distroyer aircraft in history and the oldest operational PBY Catalina, having been flown continuously since its construction.

On the production line during the attack on Pearl Harbor, Bu. No. 2459 was one of the first five PBY-5A amphibians built. Due to extremely hazardous sea conditions off Iceland, its group was sent to VP-73 as soon as they rolled off the assembly lines. Accepted by the Navy on December 22, 1941, Bu. No. 2459 was the fourth amphibious PBY built for the United States Navy. It was pressed into action immediately upon arrival. Assigned to VP-73 as aircraft number 9, it was the first PBY to sink a U-Boat.

The ASW detachment in Iceland had been attempting to sink a U-Boat for some time, and the commander of the base, believing that too many late nights at the “O Club” were responsible for the lack of success, had closed the club. On December 22, 1941, Lt. RB Hopgood’s crew in 2459 discovered and sunk U-464. After seeing the sub’s crew rescued by a fishing boat, and an oil slick from the sunken vessel, Lt. Hopgood sent an “in the clear” radio message that would become iconic in the USN’s patrol community: “Sunk sub, open club!”

That history alone makes Bu. 2459 the one to have! But it brought additional good fortune to the Navy. On October 5, 1942, Bu. 2459 was flying the last P-73 convoy mission of its deployment, protecting HX-209. The plane’s crew, headed by Chief Aviation Pilot M. Luke, discovered U-582 on the surface. They sunk this sub as it was organizing a wolfpack attack. The U-Boat, one of 16 deployed against the convoy, went down with all hands. This attack brought VP-73’s score to two sunk, both by Bu. 2459. Its success was exceptional. Only half of VP-73’s allocated PBY aircraft survived their first deployment. Bu. 2459 was the only one of those first 5 PBYs built that flew until the end of the war. Hazardous sea conditions, and even friendly fire, were deadly to the Catalinas.

Notably, a sister PBY, Bu. 2458 is listed as being wrecked on June 20 by friendly fire from a nervous convoy and subsequently destroyed on landing. Rebuilt at a depot, it reentered the fleet assigned to VP-84, in Reykjavic, coded as 84-P-7. Flown by Lt. Joseph Beach on June 24, 1943, it proved it still had the heart of a hunter, spotting U-194 on the surface south of Iceland. After depth charging the sub on the surface, and exchanging gunfire, the combatants fought to a standstill. The Captain of U-194, realizing that the PBY would not give up, attempted to disengage from the Catalina by diving. What was unknown to the sub crew at the time was that PBY Bu. 2458 carried a new and secret weapon – – a “FIDO” acoustic homing torpedo. This technology was a revolutionary development in aircraft based ASW. Although the PBY crew reported the sub as damaged because they did not see it sink, postwar research confirmed that U-194 was destroyed that day in the North Atlantic.

Incidentally, our PBY Bu. 2459 was the second aircraft to sink a submarine using the homing torpedo. This PBY is by far the most significant patrol aircraft, and highest scoring sub killer in history. It still has its original fuselage and wing, remaining intact and airworthy. It is truly one of the most historic aircraft remaining from the Second World War. PBY Bu. 2459 is currently at American Aero Services in Florida undergoing additional restoration with the addition of a nose and waist gun turrets.

*The PBY is currently being restored in Florida and not available for public viewing. Check back regularly for status updates.

Restoration work continues at American Aero Services in New Smyrna Beach, FL to bring our very historic Consolidated PBY-5A Catalina, Bu. No. 2459 back to wartime configuration. When completed, this plane will look exactly as it did when flying with VP-43 based in Iceland from 1942 to 1944. This amphibious reconnaissance and bomber airplane protected vulnerable shipping convoys from the deadly German U-Boat menace and was one of the first aircraft to fight in the Battle of the Atlantic. If you saw the Tom Hanks movie “Greyhound” from Summer 2020, you know how dire their situation was. This very PBY-5A is credited with 3.5 U-Boat “kills” to its record, making it not only the oldest PBY flying, but also the most historically significant.

Once the aircraft was brought back to the United States from the Netherlands in the Summer of 2019, the process to transform it back to stock condition began. Arguably the most complex conversion was to remove the smooth, civilian “clipper” nose modification and reinstall the original gun position and bomb aiming window along with all the associated instrumentation, drive mechanisms, and window “hatch” and curtain to protect this area during water landings.

Though the gun position looks like a turret, the rounded glass area is nothing more than a rotating .30 cal machine gun mount. The gun would need to be mounted when used and the enclosure offered little comfort for the gunner against the cold slipstream of the North Atlantic. The top of the gunner’s head was exposed by the opening in front of the aircraft! Later variants of the nose position in PBY-6A models converted the gun to a dual .30 cal with a manufactured “bubble” to enclose the gunner.

As you can see from the photos, the complexity of the sheet metal fabrication for this area is very difficult with many compound curves and internal supports. Thankfully, sheet metal expert Casey Littrell at American Aero Services had the skills needed to accomplish this task! Additionally, many other large components like the corrugated curtain and internal hatch had to be painstakingly re-fabricated from original factory drawings.
As you can see in the photos to the left, the bomb sight aiming window is sandwiched between a watertight door (far left) and the corrugated shield (immediate left) that protected the glass from icing and salt spray. The simple but effective addition of this shield was a hard learned experience for the Navy as they operated in the harsh environment of the North Atlantic.

Once this section is complete, American Aero Services will move on to the restoration of the waist blister gun emplacements with original equipment, before stripping the existing paint and repainting this historic aircraft back to its original VP-43 scheme. 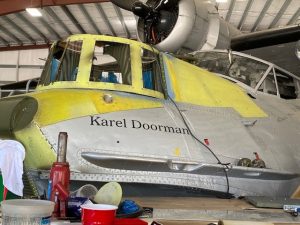 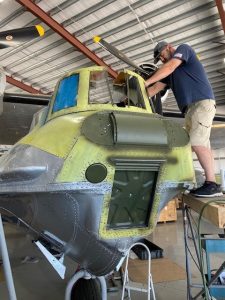 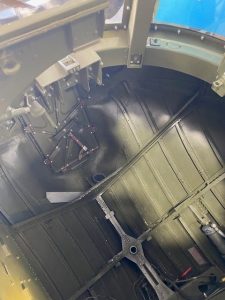 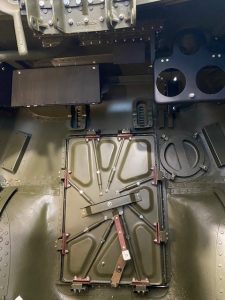 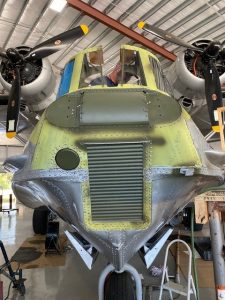 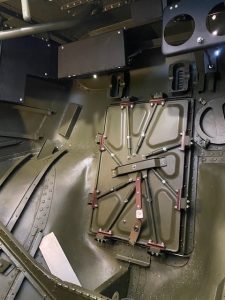 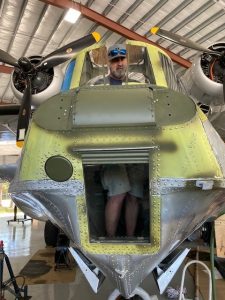 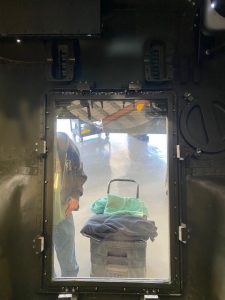