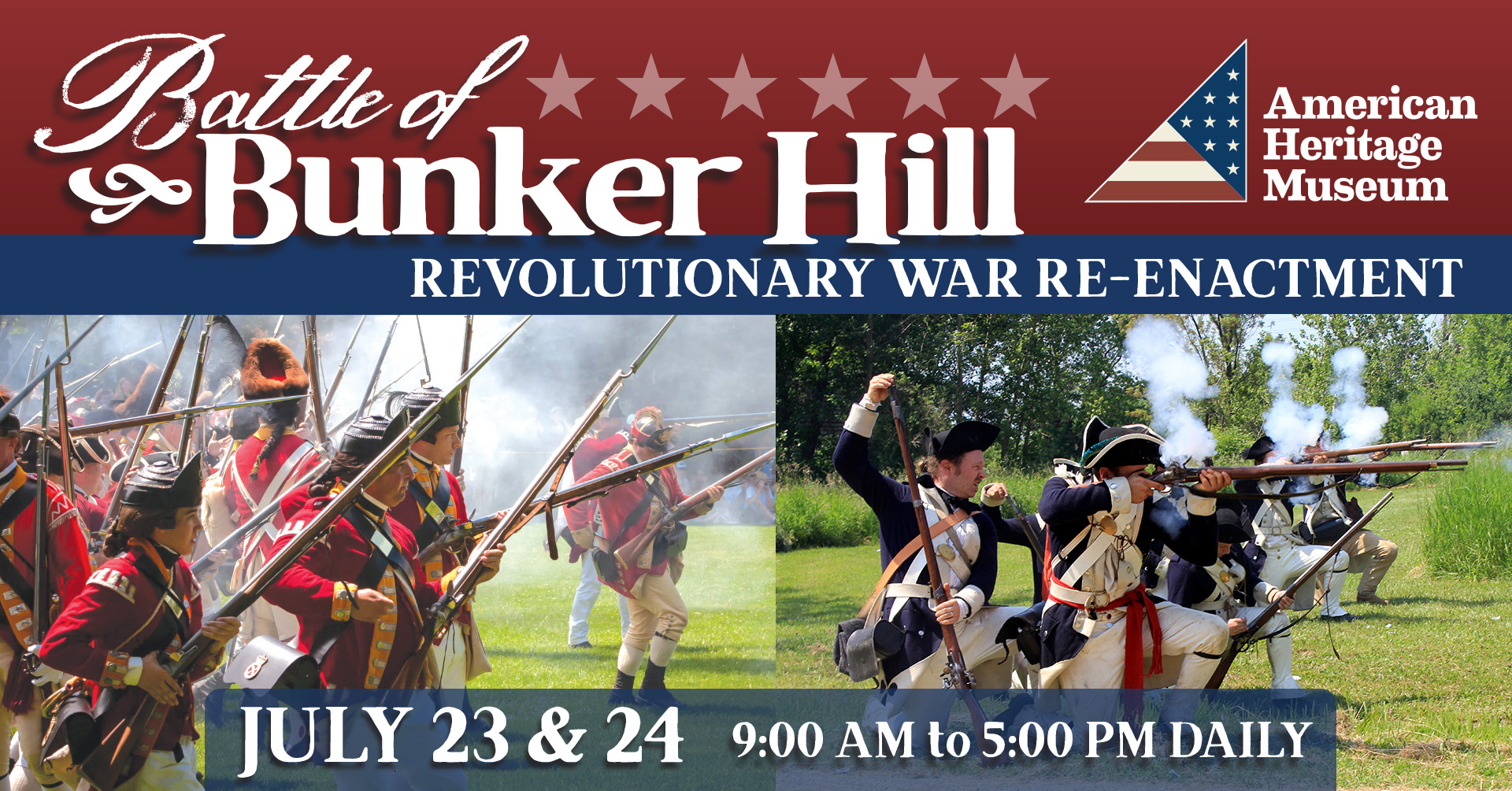 Join us July 23rd and 24th, 2022 at the American Heritage Museum for an extraordinary Revolutionary War re-enactment and living history event unlike anything you have seen! Period encampments and re-enactors will tell the tale of this infamous battle. Action will include bombardment of the redoubt on Breed’s Hill, the landing of troops on the Charlestown peninsula, company flank attacks on the Boston shore, and the multiple assaults up Breeds Hill, all done with pyrotechnic effects! It will be a spectacular living history experience! Living history camps will be open through the day. Re-enactment starts at 1:30 PM. Living History Camps, exhibitions and demonstrations 9 AM to 5 PM.

The Scenario:
June 16, 1775, on the heels of the events at Lexington and Concord that kicked off the Revolutionary War, American troops learned that the British were planning to send soldiers from Boston to occupy the hills surrounding the city. Some 1,000 colonial militiamen under Colonel William Prescott built earthen fortifications on top of Breed’s Hill, overlooking Boston and located on the Charlestown Peninsula. (The men originally had been ordered to construct their fortifications atop Bunker Hill, but instead chose the smaller Breed’s Hill, closer to Boston.) By daybreak of June 17, the British became aware of the colonial forces on the Peninsula and mounted an attack against them. Two assaults on the colonial positions were repulsed with significant British casualties; the third and final attack carried the redoubt after the defenders ran out of ammunition. The colonists retreated over Bunker Hill, leaving the British in control.

The Historic Aircraft Hangar and Classic Car Barn will also be open
The American Heritage Museum will be open along with the two additional annex buildings on our campus: the AHM Historic Aircraft Hangar and the AHM Classic Automobile Collection. The hangar features 12 aircraft from 1909 to 1945 and a collection of Midget, Sprint, and Indy Cars. The automobile collection features over 25 rare automobiles from 1900 through 1946. These additional buildings on the American Heritage Museum campus are only open for special event weekends such as this one – all museum buildings and outdoor events are covered with this admission. Dr. Joseph Warren Foundation presentation – Celebrating the life and legacy of America’s Founding Martyr
Listen to the compelling history of Dr. Joseph Warren. Dr. Joseph Warren was one of the most fervent and active revolutionaries both behind the scenes and on the front lines in the decade leading to American independence. He is perhaps best remembered for sending Paul Revere and William Dawes on their midnight rides and as the first American martyr killed in action during the battle of Bunker Hill…however Warren’s resistance activities against Crown rule cannot be overstated. 3:00 PM Saturday and Sunday presentation: Founding Martyr – The Life and Death of Dr. Joseph Warren. Read more about this a patriot click here. People of all ages can play a special Bunker Hill 3D board game in the hangar.

9:00am – 5:00pm
Gates Open – All museum buildings and encampments open to visitors.
Living history demonstrations and drills take place in and around camps all day.

10:00am – 10:30am
Presentation: “Bunker Hill 101” – located in the American Heritage Museum
Learn about the Battle of Bunker Hill from a Park Ranger who tells the story every day. It’s a good way to find out what happen on June 17, 1775, and it will help you follow the re-enactment battle each day. Presented by the National Park Service.

11:00am – 11:45am
National Park Service Presentations – located in the American Heritage Museum

Saturday Presentation: “The Siege of Boston”
June 17, 1775 was the bloodiest day of the Siege of Boston. Discover the chronicle of events leading to the Battle of Bunker Hill and the nine months that followed when rebellion turned into all-out war. Presented by the National Park Service.

Sunday Presentation: “Patriots of Color”
Black and indigenous militiamen such as Jude Hall and Barzillai Lew made up a significant part of the army fighting for Independence at the Battle of Bunker Hill. Join us to learn about their stories. Presented by the National Park Service.

1:30pm-2:15pm
Battle of Bunker Hill Re-Enactment – Field Behind American Heritage Museum
Over 200 Colonial & British Soldier Re-Enactors defend and attack our own “Breeds Hill” with musket and cannon fire and pyrotechnic effects. Historians narrate the battle and the scenario throughout. The highlight to the event day!

3:00pm – 4:00pm
Presentation: “Dr. Joseph Warren – Celebrating the life and legacy of America’s Founding Martyr” – located in the American Heritage Museum
Listen to the compelling history of Dr. Joseph Warren. Dr. Joseph Warren was one of the most fervent and active revolutionaries both behind the scenes and on the front lines in the decade leading to American independence. He is perhaps best remembered for sending Paul Revere and William Dawes on their midnight rides and as the first American martyr killed in action during the battle of Bunker Hill…however Warren’s resistance activities against Crown rule cannot be overstated. Presented by the Dr. Joseph Warren Foundation

5:00pm
All museum grounds, buildings, and encampments close for the day.

EVENT MAP
See a map of the Battle of Bunker Hill event weekend at this link to plan your days.

Admission for the Saturday and Sunday events are as follows:
$30 Adults  |  $25 Seniors/Veterans  |  $15 Children Under 12
WWII/Korean War Veterans and Children Under 3 are Free – No ticket required.
Admission discounts can not be used for special event weekends.

Tickets may also be purchased the day of the event by Credit Card or Cash at the entry gate on the access road as well.

TANK RIDES AVAILABLE
For a little more “modern” history, you can take a ride during the weekend aboard our WWII era M24 Chaffee or M4 Sherman tanks through our wooded course. Sign up at location. $595 donation for a group up to three (3) people in the M24 Chaffee or up to two people (2) in the M4 Sherman.

Members: Bring your membership card for discounted pricing on the day of the event. Members are $20 Adults, $15 Seniors/Vets, $10 Children under 12. No discount without valid membership card or membership purchase proof.