The French-built and designed Nieuport 28 holds an important place in American military aviation history for its service in World War I. Issued to four American squadrons between March and August 1918 until the more powerful SPAD XIII became available, the Nieuport 28 became the first aircraft to see operational service with an American fighter squadron.

The American Heritage Museum, through a generous donation in 2019, received what is arguably the last original Nieuport 28 capable of restoration to flying condition. This particular aircraft is a 1917 Nieuport 28 C-1, serial number 512 and was owned and flown from the 1930’s through the 1960’s by movie pilots Frank Tallman and Paul Mantz of Tallmantz Aviation in Santa Ana, CA and was used in a number of movies and television shows. The aircraft had not flown since the 1970’s and was in storage when it was donated to the AHM.

The mission of the American Heritage Museum has always been to bring history to life and the Nieuport project was no exception. This is a very rare opportunity to bring America’s first fighter back into the skies and honor the designers, pilots, and mechanics of the First World War. When complete, it will be the sole airworthy original Nieuport 28 in existence, and one of only four on display in the world.

Currently, The Nieuport 28 is in the incredibly skilled hands of Mikael Carlson in Sebbarp, Sweden. It was shipped from Texas in the summer of 2019. Mikael is arguably one of the world’s leading restorers of pre-1920 aircraft, and is a master historian when it comes to the unique designs and constructions of WWI planes. Mikael has previously restored two original Bleriot XI’s, and exact flying reproductions of a Swedish Tummelisa from 1919, Fokker DR.1, Fokker D.VII, and a Pfalz D.VIII — all with original power-plants.

The primary fuselage structure of the Nieuport was in fantastic shape, with original factory markings and stampings of the late-war manufacturer, Lioré et Olivier, throughout. Though the stringers and upper bulkheads were not original, and would need to be replaced, this primary structure was retained. All metal components were also found to be in excellent condition and will be utilized in the restoration. Additionally, the upper wings had been clipped during its use as a movie aircraft by Tallmantz, so Mikael rebuilt a portion of the upper wing to bring it back to original size using the same construction methods that would have been found in 1917.

Surprisingly, the original nine-cylinder Gnome Monosoupape 9N rotary engine was in outstanding condition, despite its age. Mikael was able to break down the engine last winter and, drawing on his intimate knowledge of the type, fully overhaul it. The original cowling for the engine was no longer with the aircraft, having been replaced with an inaccurate piece in the 1950’s. So the cowling, a single piece of spun aluminum, was manufactured by a British company using period correct fabrication methods. The entire airframe has been finished and the engine mount and engine has been installed along with the cowling, that sits on top of the very tight tolerances of the original design around the spinning rotary engine.

Though the original propeller was intact and in great condition, we decided to craft an exact reproduction of the laminated wood propeller with new glue to use for flight trials. The original propeller will be reserved, and installed when the aircraft is placed on static display. Mikael finished the new propeller and mounted it this month when he assembled the entire aircraft for test fitting and the photos you see here!

The next step is covering fuselage and wings in the period correct bleached Irish linen, which will take place this fall. The remaining fairings will be added and the cockpit will be completed with original equipment, including a very rare gun synchronizer connected to the propeller. The original machine guns are under restoration in the United States and will be added to the aircraft when it is reassembled here next Spring.

Stay tuned for more updates this winter as the aircraft reaches completion! 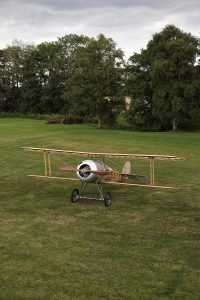 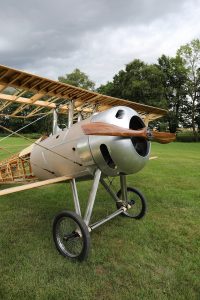 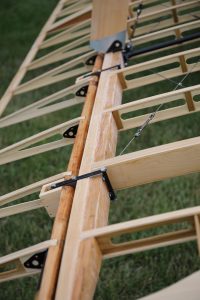 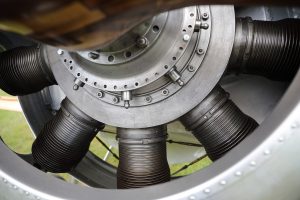 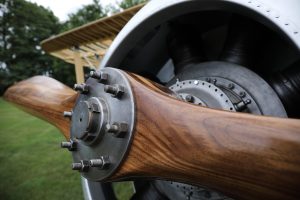 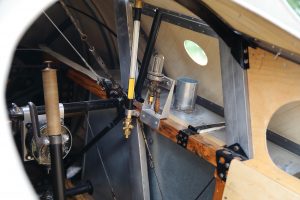 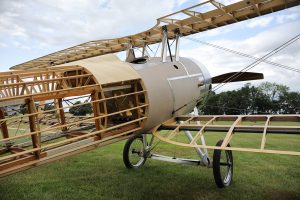 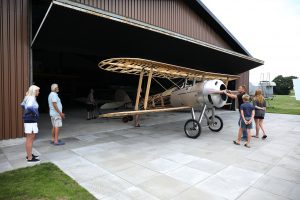 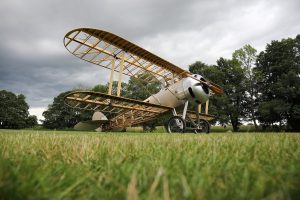 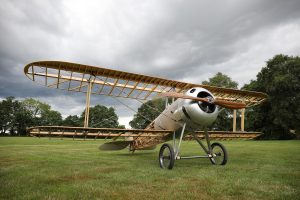 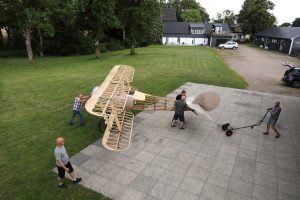